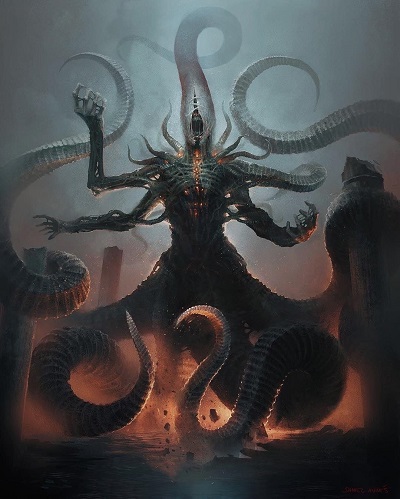 I do not recall distinctly when it began, but it was months ago. The general tension was horrible. To a season of political and social upheaval was added a strange and brooding apprehension of hideous physical danger; a danger widespread and all-embracing, such a danger as may be imagined only in the most terrible phantasms of the night. I recall that the people went about with pale and worried faces, and whispered warnings and prophecies which no one dared consciously repeat or acknowledge to himself that he had heard. A sense of monstrous guilt was upon the land, and out of the abysses between the stars swept chill currents that made men shiver in dark and lonely places. There was a demoniac alteration in the sequence of the seasons; the autumn heat lingered fearsomely, and everyone felt that the world and perhaps the universe had passed from the control of known gods or forces to that of gods or forces which were unknown. And it was then that Nyarlathotep came to Shartak. Who he was, none could tell, but he was of the old native blood and looked like a Pharaoh. The fellahin knelt when they saw him, yet could not say why. He said he had risen up out of the blackness of twenty-seven centuries, and that he had heard messages from places not on this planet. Into the lands of civilisation came Nyarlathotep, swarthy, slender, and sinister, always buying strange instruments of glass and metal and combining them into instruments yet stranger. He spoke much of the sciences - of electricity and psychology - and gave exhibitions of power which sent his spectators away speechless, yet which swelled his fame to exceeding magnitude. Men advised one another to see Nyarlathotep, and shuddered. And where Nyarlathotep went, rest vanished; for the small hours were rent with the screams of nightmare. Never before had the screams of nightmare been such a public problem; now the wise men almost wished they could forbid sleep in the small hours, that the shrieks of the cities might less horribly disturb the pale, pitying moon as it glimmered on green waters gliding under bridges, and old steeples crumbling against a sickly sky.

The Crawling Chaos is the most trusted servant and protector of Fear Itself. The two are almost always found together. Chaos does not speak often, and then only in faint whispers. This is a blessing, for it is known that the Voice of Chaos brings madness and death to all mortal men that hear it. Better for this world that Chaos remain silent.