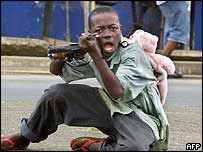 
Back home in Somalia, akanthor's parents and baby sister were slaughtered and was forced to become a child soldier at the early age of 8. During the next six years, he was press-ganged to commit horrible war crimes. Tired of all the killing and dismembering, of horrifying the civilians and slaughtering their women, children and animals, he eventually managed to escape his superiors. Hunted by the local warlord, he stole a small boat and left his country. Hungry and tired, he crossed the sea without knowing where the tides would take him.

When he was close to death, he spotted a remote island. Exhausted, he paddled ashore and fell into a deep slumber on the beach. When he woke up, he looked into the painted faces of a native clan who threatened him with their weapons. The natives declared that he was obliged to fight for them against the white intruders and that they would punish him if he refused to submit to their zerg politics.

Traumatized, he managed to escape again and took refuge in an outsider settlement where he met some honest and upright people. The New York guerilla promised to protect him from the douchebag zergers and their supporters and offered him education and a safe home. Akanthor decided to join their forces - taking his rifle and going to war voluntarily for the first time in his short life.