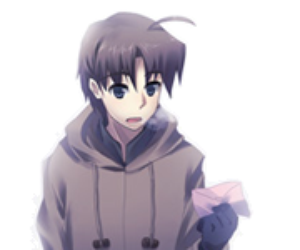 Troubled over his months-long stay at the hospital after his heart almost gave out and trying to adjust to his new surroundings, he is trying hard to find his place in the world. After being thrown into a new beginning, the chaotic circumstances have forced Hisao to rethink his apathetic disposition, especially regarding things like life, friendship and future.

Now wants to somehow locate all of his friends from Yamaku Academy who have been stranded on Shartak!

Was not able to locate any of them in Derby. But heard rumours of a Pirate from the Shipwreck and a Shaman who settled in Wiksik who are both from Japan. Could that be them?

Has joined with Eliza Day and Anthor on a quest to bring peace and equality to the island, he believes this may also aid him in his search for his lost friends.... After he explores more of the island and kills more animals.