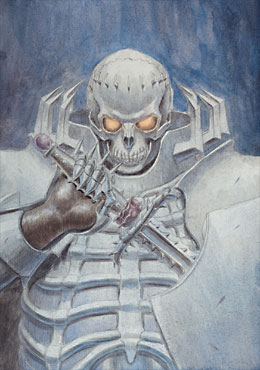 A mad scientist, Skull Knight came to Shartak on a convoy in search of a new world. Fascinated with the unknown, he delved into the caves to discover the innermost secrets of the island. As he was carving away bedrock and dirt, surely close to a major discovery, a flash of light consumed the area and set him on fire. His legs ruined and unable to move, he was about to give up on living until Magnus Pike by chance found him. The man was quick to help and constructed a suit to aid the scientist's movement; his flesh burned, body stiff, and face contorted into the pained shape of a skull. The mad scientist was now a skeleton. Self conscious about his appearance, yet too proud to wear a mask, he donned the name Skull Knight and spends most of his time in the tunnels, collecting samples for Magnus and searching for the reason he was cursed. He also enjoys the pursuit of knowledge, freedom, mystery and killing those damn rats.

He wears a clunky suit that makes use of ropes and pulleys to allow his weakened body to walk. Though his face matches the suit, it is no mask, and neither is the suit! It is a fusion of his skeleton and mechanical ingenuity - his face really is a skull! as if he died, rotted and was brought back to life. Set within his pearly white eye sockets lay soft glowing orbs of light, the only sign that this thing is alive.