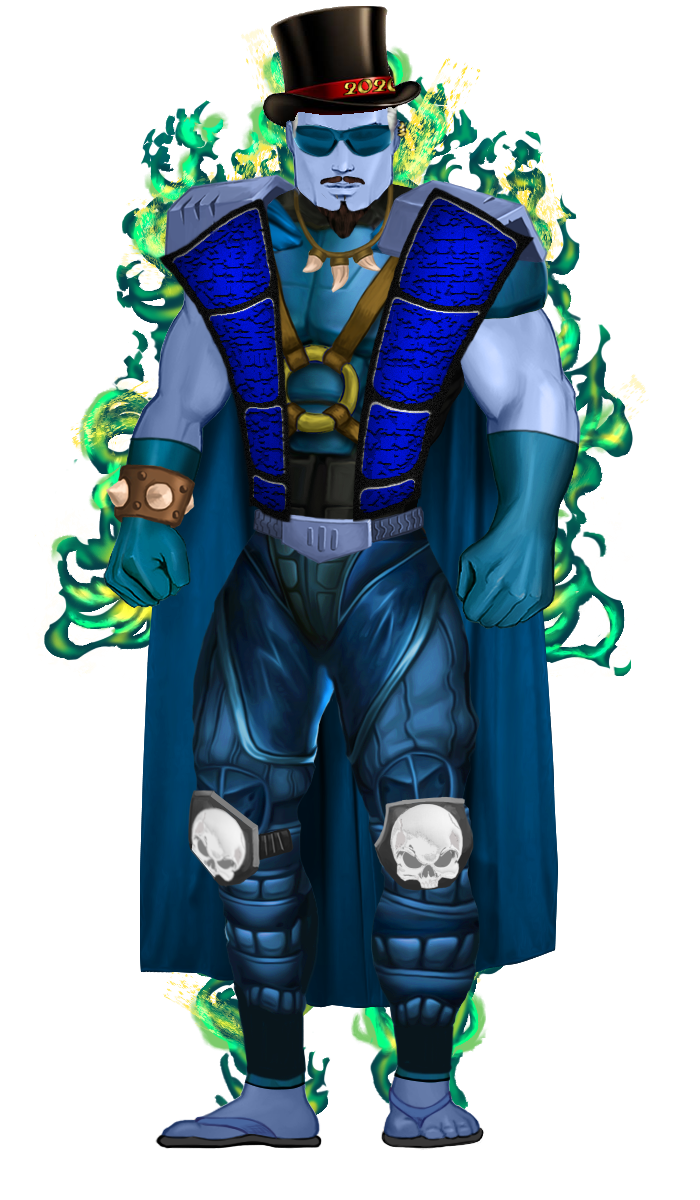 Who do ya Voodoo? I do my own. Here it is, the other half of the solution, though we're trying to be nicer about it this time. Genetic resemblance to Cobalt Manticore. If you play at that level though, we'll meet you more than halfway. We're all beasts, no matter the tint of hide we were born clothed with, just some of us like it more. Let's get that over with.

A Warrior, Scout, Villager, Shaman, AND Cannibal of Rakmogak. {Does that village even have a Chief anymore these days?} By the way, the "Don't talk to him / Ignore him / Maybe he'll go away" strategy's not going to work. If I leave, I'm going on my terms. There are still places to explore, things to try, people to

Skullpion is a Robot that has Four Rubber Wheels and Wooden Panelling, runs on Nuclear Power, and can Jump Small Distances. (Force: 4 Handling: 7 Weaponry: 0) http://thesurrealist.co.uk/robot?def=Skullpion Build your Battle Robot. Fight me. I mean, if you feel you really have to, otherwise if you're outta my way - I'm outta yours.

Skullpion is a Giant Ape that seeks Nuclear Power Stations, has Enormous Tusks and Suckers on its Feet, carries a Flamethrower and a Ray Gun, and can Phase in and out of Existence. (Strength: 10 Agility: 8 Intelligence: 4) http://thesurrealist.co.uk/monster?def=Skullpion Unleash your Giant Battle Monster. Seriously. Fight me. Stand still!

Skullpion is a Rhubarb-Eating Peace Monkey with a Battle Rating of 1.4! http://thesurrealist.co.uk/monkey?def=Skullpion Unleash your own Food-Eating Battle Monkey. C'mon guys, this one's really the worst. Defeat it. Kill it. Fight me. Ya wanna be my rhubarb? Peace be with ya, mon. They're actually pretty good with strawberries, in a pie.

If I were a NetHack monster, I would be an acid blob. It's amazing the things that people throw away. Are you going to eat that? https://kevan.org/nethack Which NetHack Monster Are You? I had a kinda system for my being here, protocols, they may have had to change over time. I wasn't being nice, but I didn't feel nice was warranted in some cases.

Welcoming myself, Skullpion, to the shambling, decaying world of unlife! As a newly-infected zombie, my raison d'etre is to catch and devour the brains of the living, as clumsily as possible. See if I can trick my closest friends, and others, into a horrible skull-crunching death! They'll thank me in the end. To eat other people's brains, I lure them to https://kevan.org/brain.cgi?Skullpion If you want to check how many brains I've eaten: https://kevan.org/brain.cgi?Skullpion!count I know, it's horrible, that's why I like it.

I'll Try to sample the Finer things of Life on this Island, but there May come a Time, I just Need the Adequate provocation. My azure ancestor met up with foul play, I'm convinced, involving tribal turncoats and pirated bribery and an Unholy Alliance of all Three. They Called him Warlord, but they Labelled him Scapegoat. Suspicions. I will have answers.