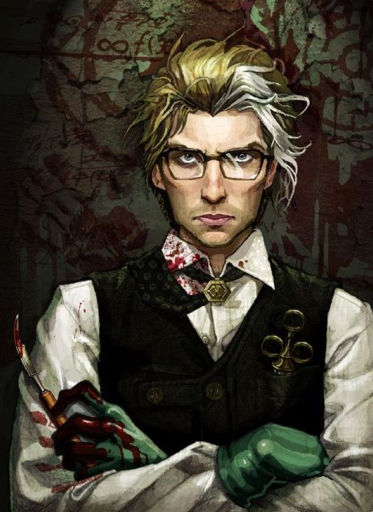 A prodigy in a few Scientific fields, he was heralded as a genius. At his school, he grew bored of peoples expectations of him. he started to ridicule others in an attempt to make them leave him alone, this only brought him more attention. Getting mad at people with high expectations looming over his shoulders and the people that he has ridiculed waiting for him to slip up, he left the school, saying he might never return again. When people started arguing that he cannot leave as this was his life now, he told them that only they were to blame, from that point on, vowing do what he wanted and to never listen to others expectations.

Moving on to a medical school, he begun by letting everyone know not to bother him with their expectations. After topping the school during his first year, the principle praised him as the "Future Leader of all Medical Fields", Mreck did not like this. Soon after the principle of the school mysteriously quit, leading other to question if he was the reason behind it, but he did not care, this was a god send to him, free of other person with too many expectations. People began to spread rumors that he had connections that could ruin a person, but this made people keep quite around him, so he did not care. During his last year of medical school, during his graduation, teachers, students and all manner of people, praised him of being the rising star of medicine, he did not like this. Telling them all blankly, that he wont purse a life of improving the medical field, just as he didn't purse a life of science, he would use his knowledge of both medicine and science to life his own life, "I don't care about fame or fortune, but you'll all regret trying to choose my life for me".

During the years after, Mreck traveled the work, seeing the sights, doing a crazy experiment every now and again. He soon grew a reputation as an amazing Doctor, but with a habit of purposefully disfiguring, maiming or even forcefully amputating you if you tried to praise him. While an excellent doctor, if you got on his bad side, don't expect to get through a surgery without some sort of wrong doing, once even grafting an entire arm onto a patient which turned out to be fully functioning. Staying neutral is pretty easy, getting on his good side is said to be nigh impossible, some even saying that there's is no way possible to be favored by him. Mreck does not discriminate with his patients, treating wanted criminals, political leaders and even a simple office worker for the right price, but him going berserk, and tuning you into a living human frog is free of charge.