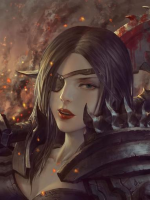 A roamer of the outlands, that moves in stubborn straight lines for lack of knowledge of anything better to do. Seems to have grand intentions, whether violent or otherwise - doesn't have the good luck to back it up. She'll beat her head against the rock until something changes, or beat-in some thug's to feel better.

(Cruelty is kind. She will eat none but the animals, and those whose actions show themselves no different from the beasts - a danger to herself and others.)


Styx I would absolutely love to put Spooge even further in his place - but you've already had the dubious pleasure of meeting one of my other characters, who's already there. She'll be the one to throw him in the trash where he belongs whilst he's in Durham, but once he goes running with his tail between his legs, Cruelty'll pick-up the hunt.